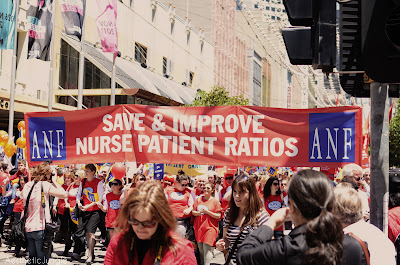 Well well well, summer has officially started and Meredith Music Festival is this weekend. So I guess
i've been dreaming of drinking cold beers in the nice warm sun, but no, of course it's now predicted to piss rain the whole weekend. So the only thing i'll be drinking is mud and rain water as my tent floods. Anyway life goes on.
The photos in this post were taken on the same day as the previous post. However as we also attended the event we had too much material so we decided to split it into two posts. And as you are about to see it was a truly wonderful sunny SPRING day!
We had a bit of it all really, first we struck the nurses rally, which I might add we fully support. However it did hinder a shoot for a while as there were far to many people around to operate.
Anyway we did indeed find some very special people with very contrasting looks and a variety of expression. As always each of the following people inspired in me their own way.
M. 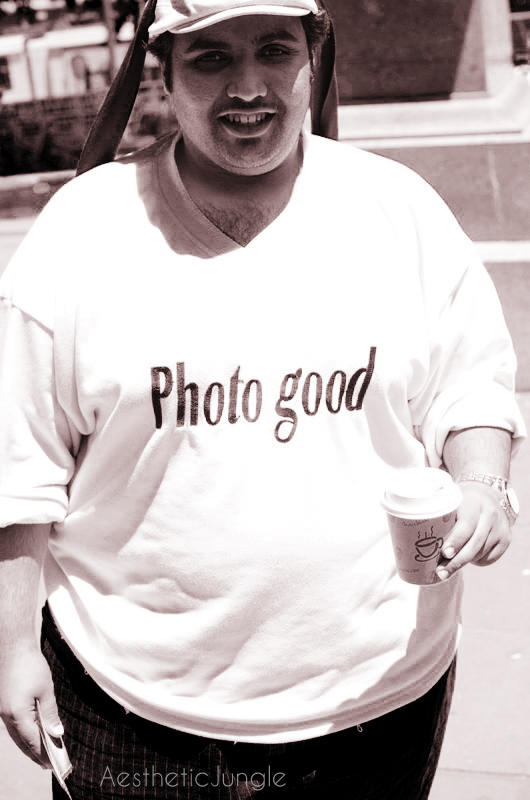 I saw the guy below at the library and his T-shirt was just a "Good Photo".
M. 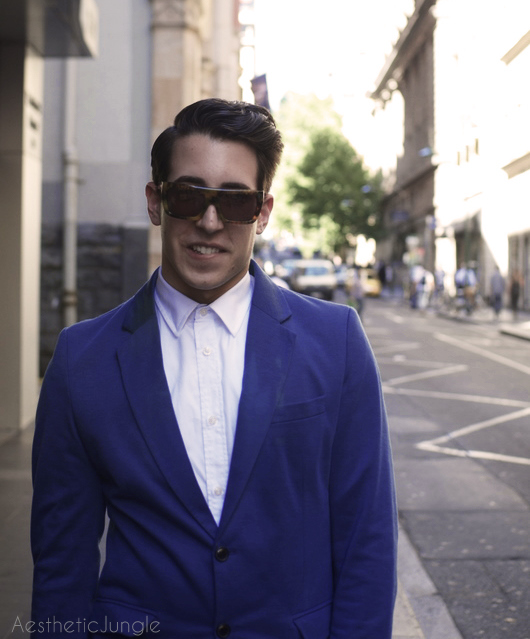 This guy was the last person I shot for the day while I was waiting for Bea. Before wrapping things up and getting some beers he wondered down the lane. It had been a long day and I couldn't really be bothered getting another shot, however this guy looked pretty friendly and I liked his look. As always I generally envy a look I can't pull off myself!
M. 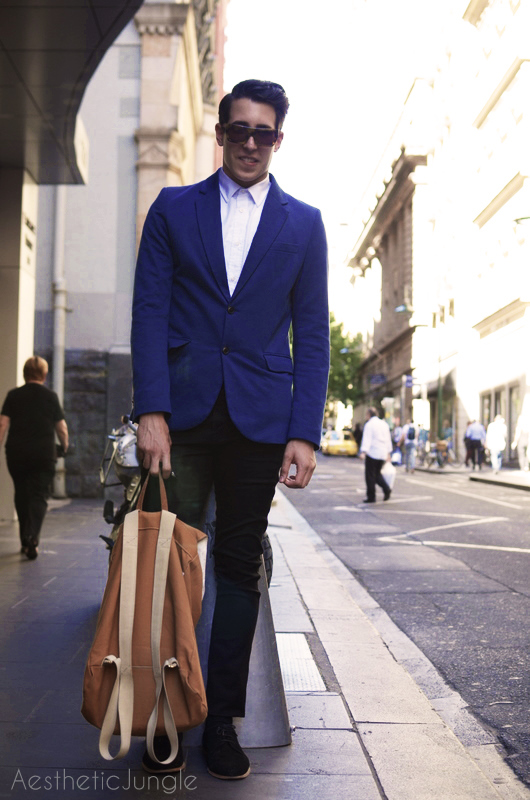 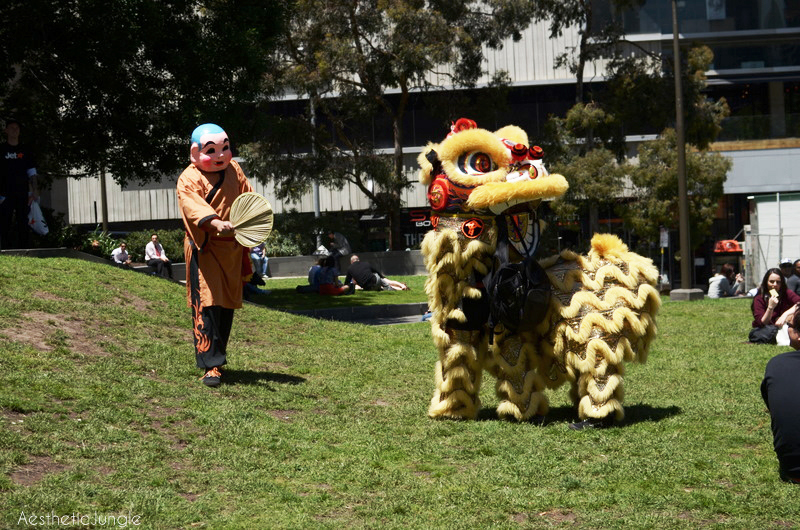 After leaving the rally we thought we'd try and get away from the crowds and head to the library for some peace and quiet. We were wrong. Jet Star had a promo to China running and to celebrate had Chinese drummers and dancers. These guys were running around stealing peoples bags and so on. It was funny for a while and then it started to wear a little thin so we took off.
M. 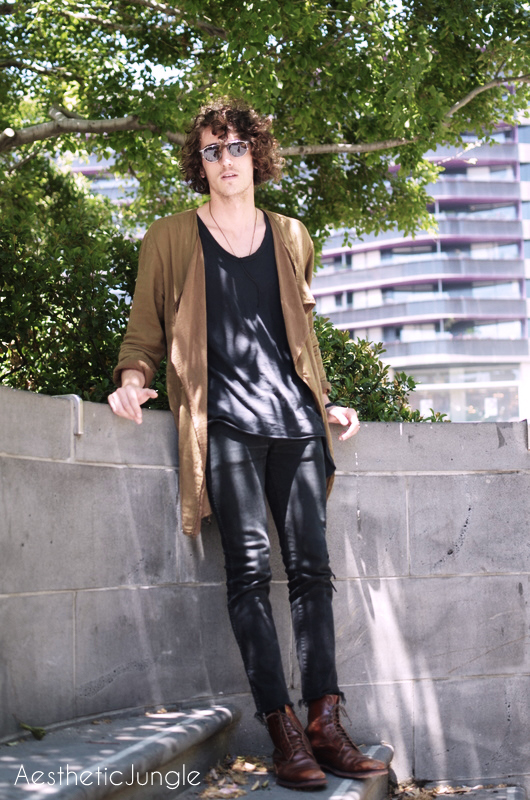 This guy had something very british summer rockstar about him, he was dressed in thin light items perfect for the warm day. He was also just going to enrol at RMIT which I had to do today as well.
M. 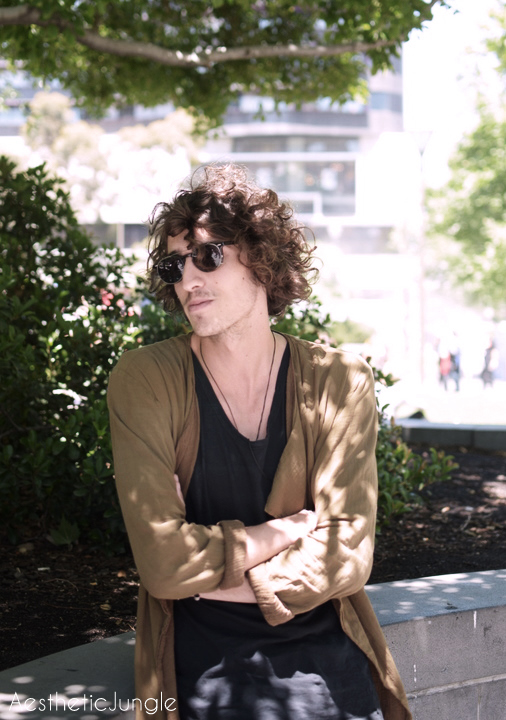 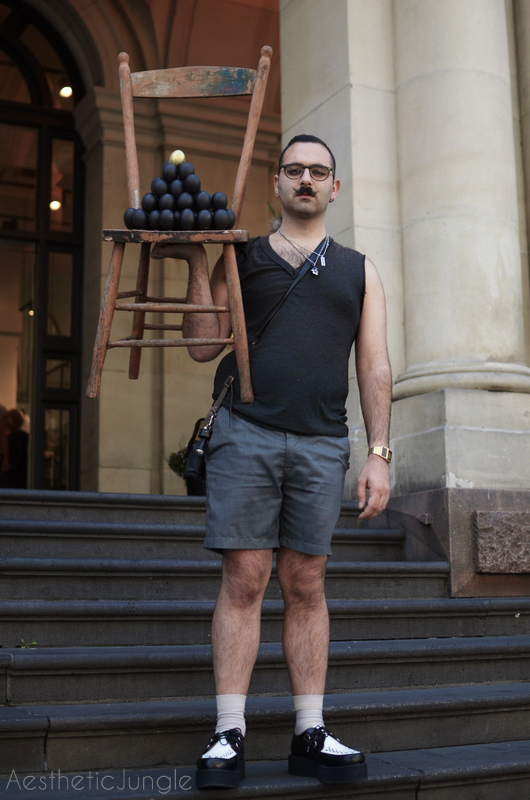 This guy was looked very interesting and the mystirious chair made him even cooler. I'm not saying that this guy doesn't know who he is, but i've started to notice that sometimes people struggling to find who they are, produce the most wonderful contradictions within an individuals personal look. I had a chat to this guy and the chair is a piece of art he had created. He and his friends were carrying it around to gain feedback from the general public all the time.
M. 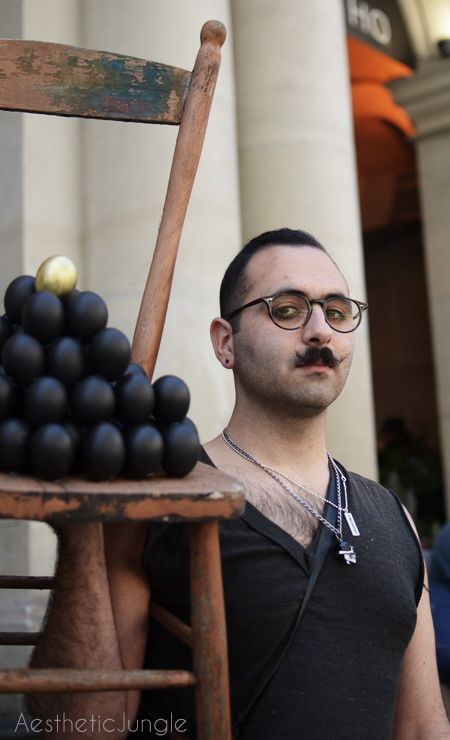 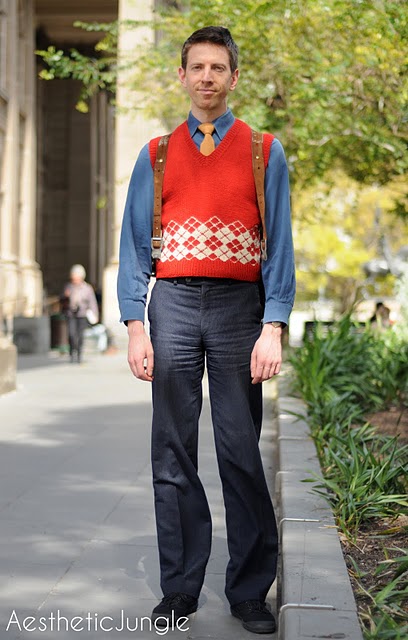 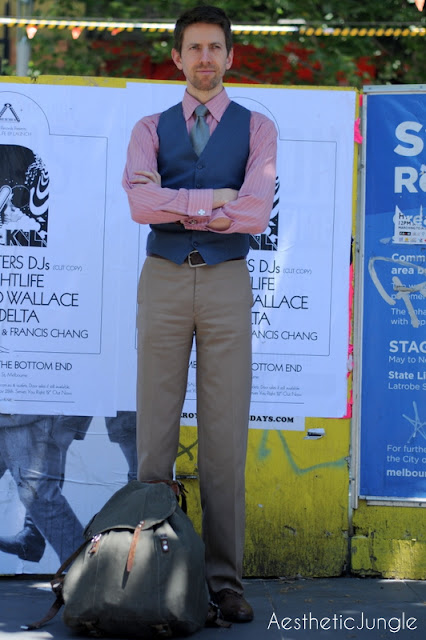 It was the start of the day when I caught the eye of someone i'd shot a few months ago. Meet Jeremy. We always see people who we've previously photographed but none of them ever stop for a second chat. It was great to catch up with Jeremy and take another photo. His distinct style was still as sharp as it was when we first met. On the left is the photo we first took and below is the more recent one.
B. 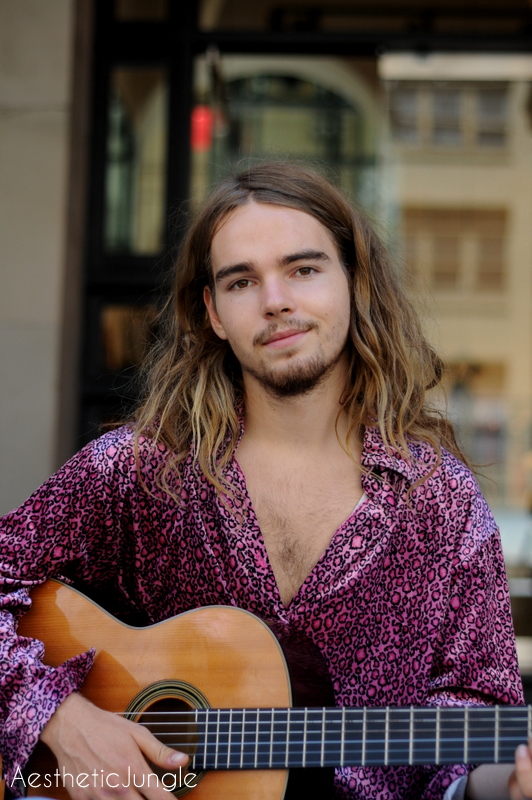 This guy was literally off in his own world when we stopped him for a photo. He was happy to sit down and play me some guitar while we took a few shots.
B. 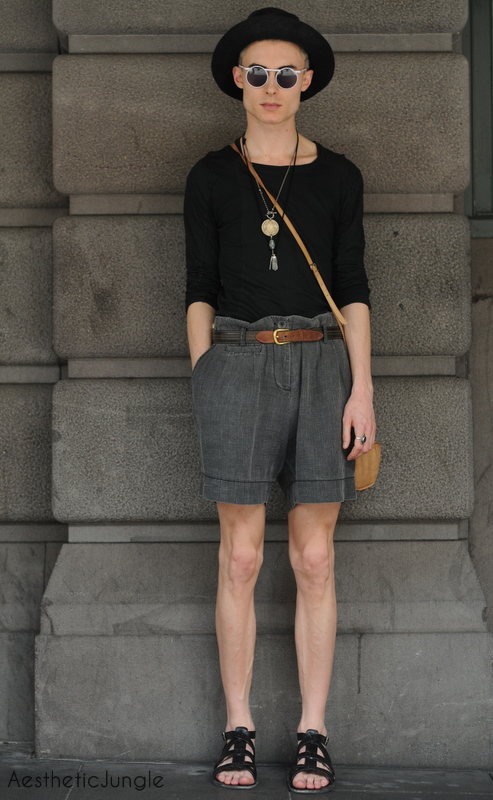 I actually took this photo a few weeks ago and have been waiting to put it in a post. I was just walking by Flinders Street when I spotted him and thought he had the best summer outfit i'd seen. The necklaces, hat and glasses just topped the whole look off. It's great to find such individualistic people on the street and to see that they're completely confident with their look
B. 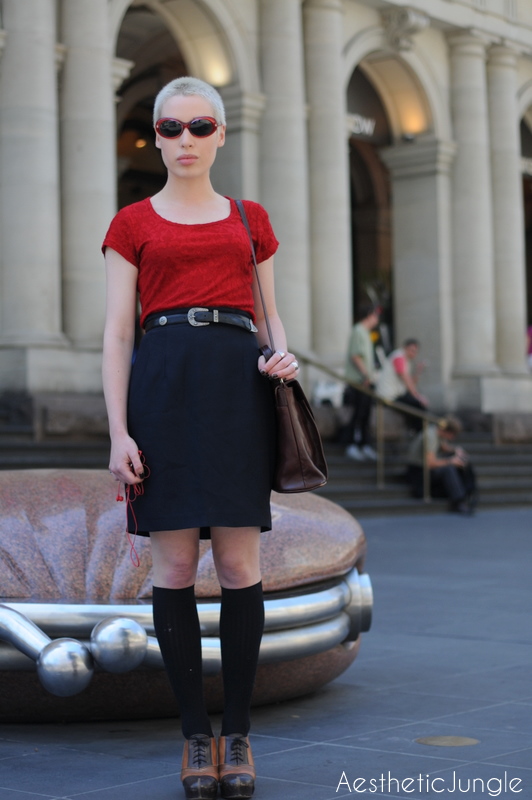 When I saw this girl at the tram stop it was one of those occasions where the accessory drew my eye. In this case it was the bag, it was just perfect and intrigued me to look at the outfit as a whole. Not only was the bag striking so were the socks, heels and red top. This girl had just been at a gig for the 'Melbourne Festival' and was happy to have a brief chat before catching her tram.
B. 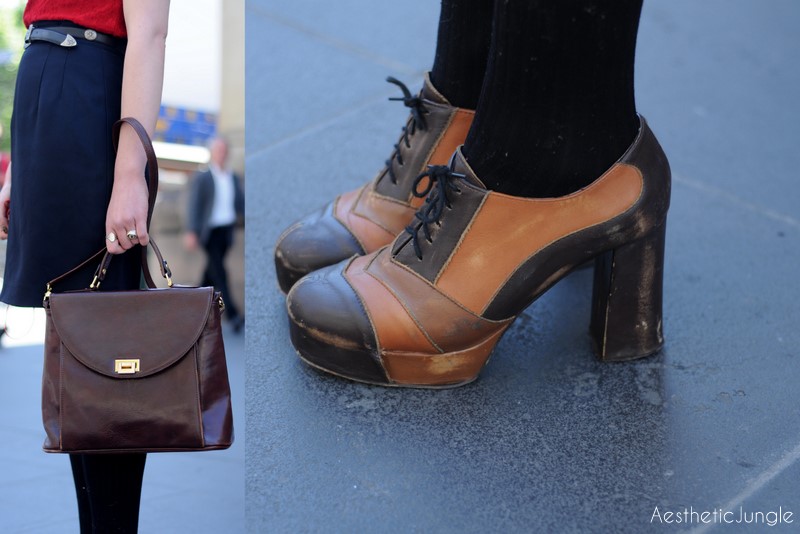 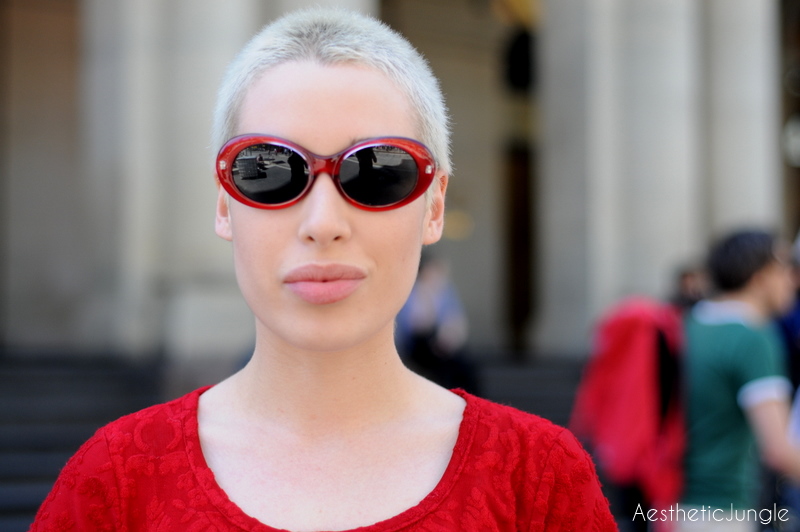 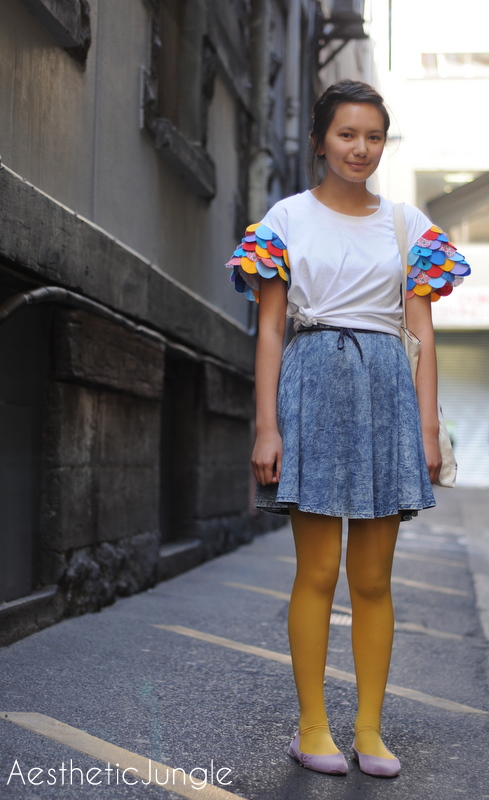 Sometimes Michael and I feel a tad creepy when we chase people down the street and ask for their photo. This was the case when I spotted this girl. Firstly I chased her down the street, and second I asked her down a creepy lane. I don't know if i'd be that trusting but she was and I was lucky enough to get a cool shot. My favourite part of her outfit is her top and she actually added those sleeves herself! What a great project to do, so colourful and crafty.
B. 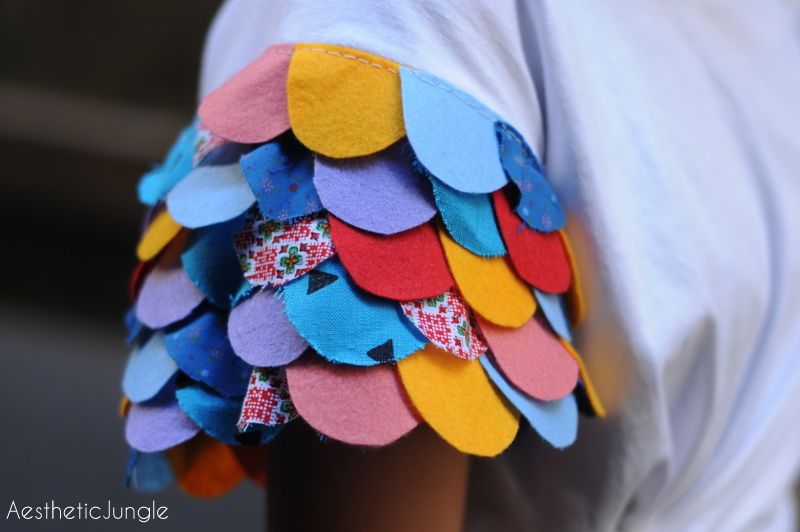 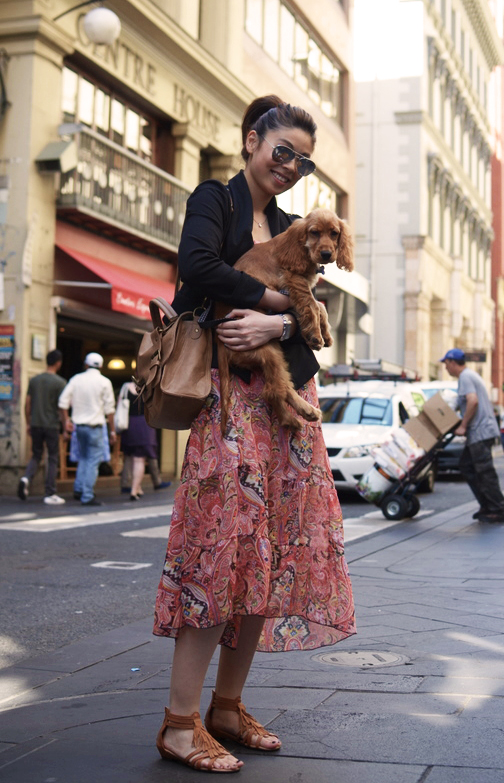 Posted by AestheticJungle at 12:21 AM