As far as winter goes, yesterday was as bad as it gets. It was cold, windy and ocasionally dared to throw that annoying spitting rain down upon us. As far as taking photos is concerned it's about as tough as it gets. However we persisted and found some lovely people out and about. Again we ran into many travellers who unfortunately aren't seeing the best weather our country has to offer. Yesterday was an interesting day despite the weather, we actually got our photo taken by another blogger (http://www.fashiontrics.blogspot.com/) which was a new experience and had a sence of 'deja vu' about it. We also got stuck talking politics at the end of the day with some same sex marriage activists which was a very humbling experience.
Peace and Love.
(Especially the love because it's LOVE week)
M. 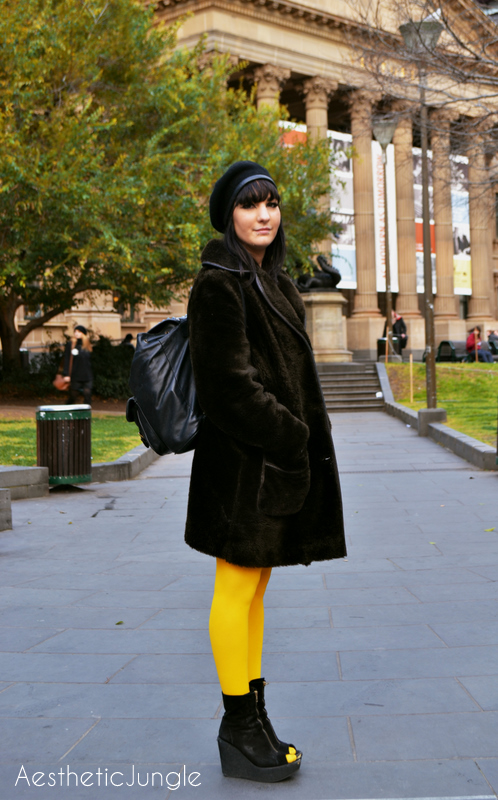 It seems to be the flavour of the month at moment for girls to be enjoying the stand out tights with some sort of heel combination, and I have to say I really dig it!
M. 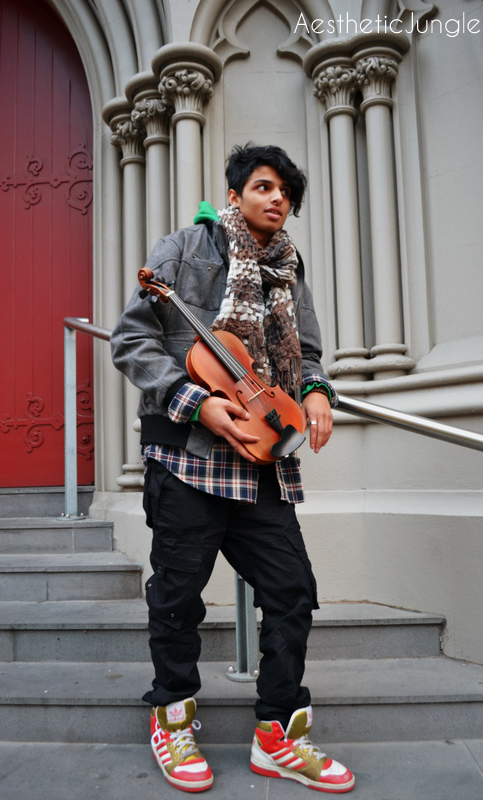 Yep! This dude was working the old extreme accessory style vision, how very 90's of him! However the point is clear, if you carry around a violin for the sake of being noticed, people will notice you. After all it is love week, maybe he was hoping to bump into a girl just carrying a Bow round and that would be fate!
M. 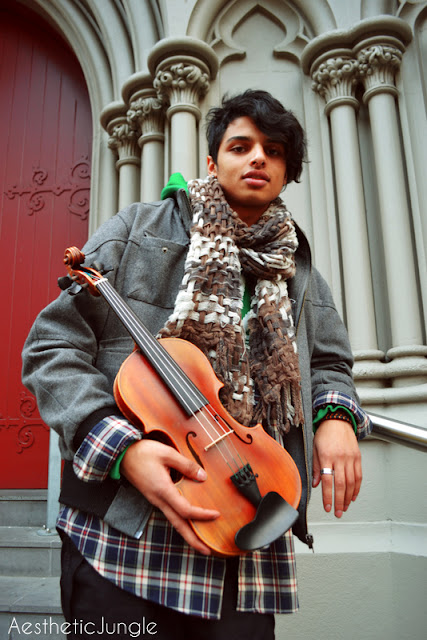 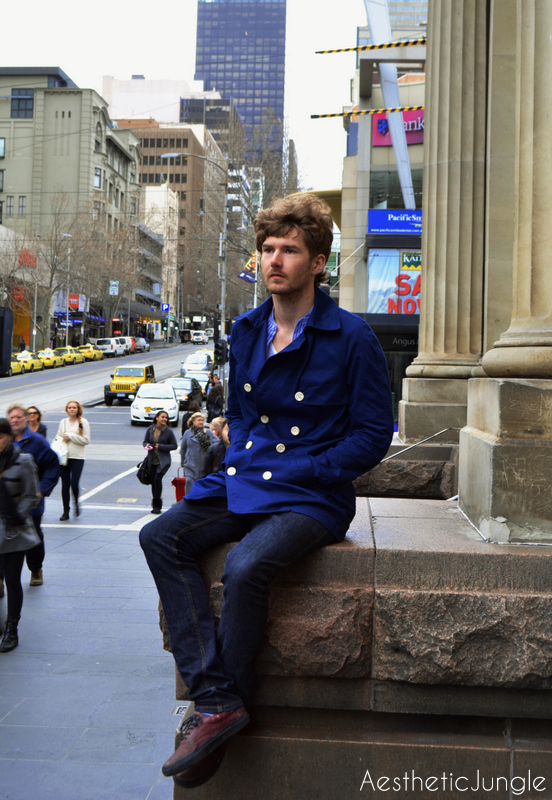 This guy was from Austria and was really nice, I really liked his coat and his chilled hair.
M. 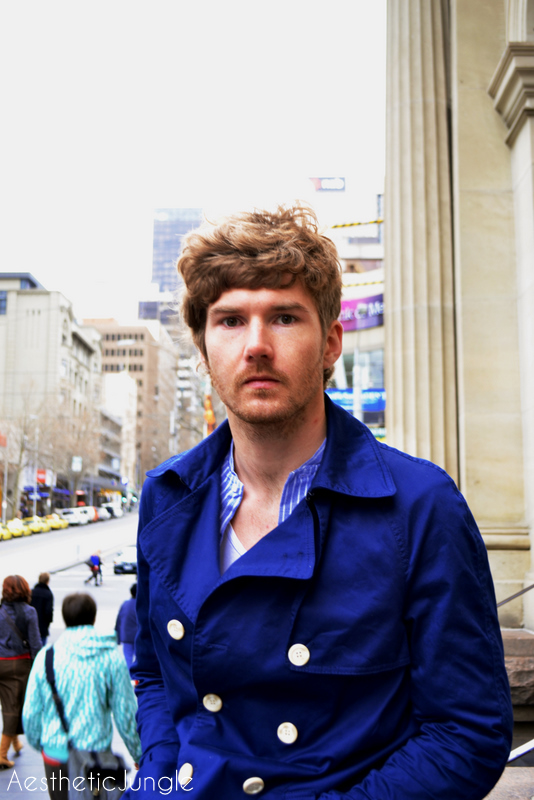 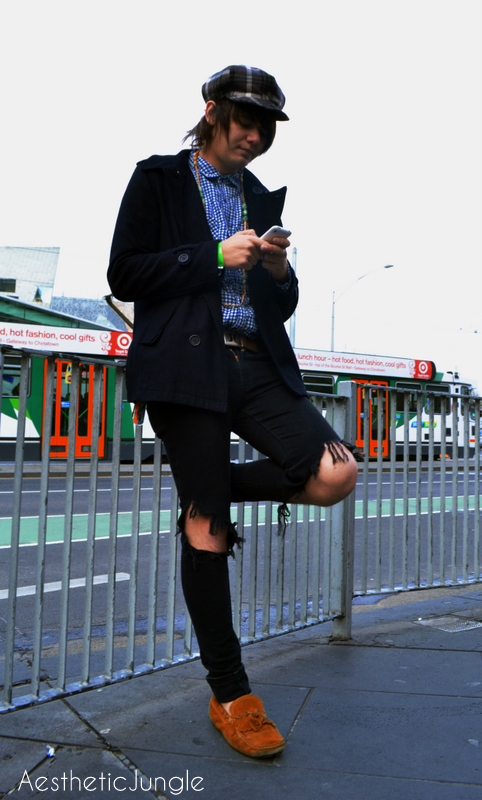 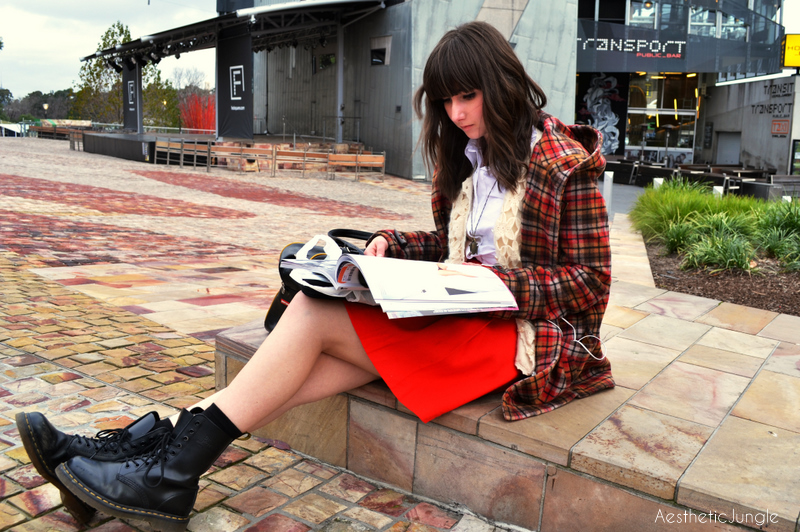 The girl reading the art book outside the art gallery. How fitting. I suppose this was one of those moments where I was waiting for something to seduce me and point me in the right direction. I crossed the lights, had a thirty second browse for the most interesting person I could see, and I chose the girl in the red skirt.
M. 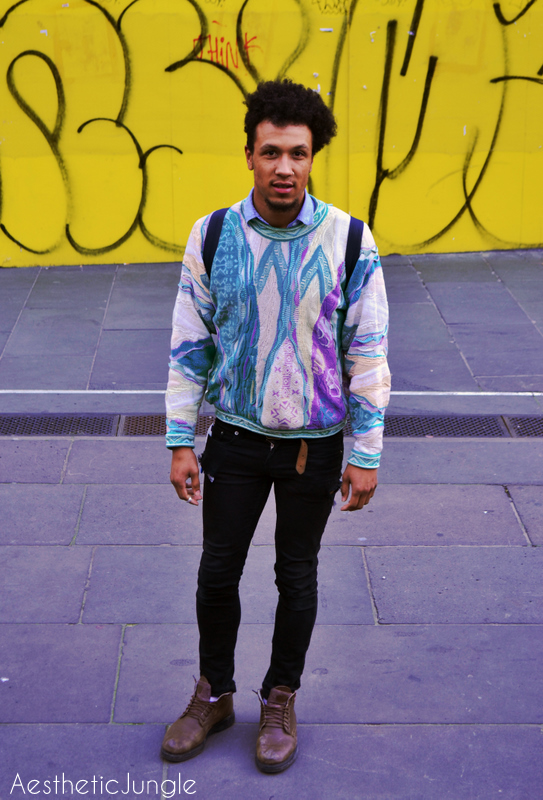 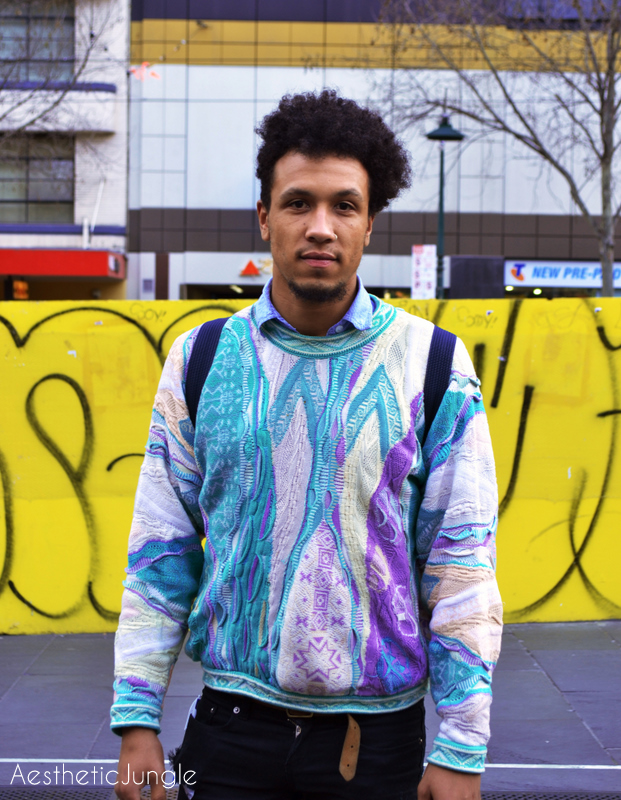 Peace out brother! Because just looking at your jumper is making me peace out.
M. 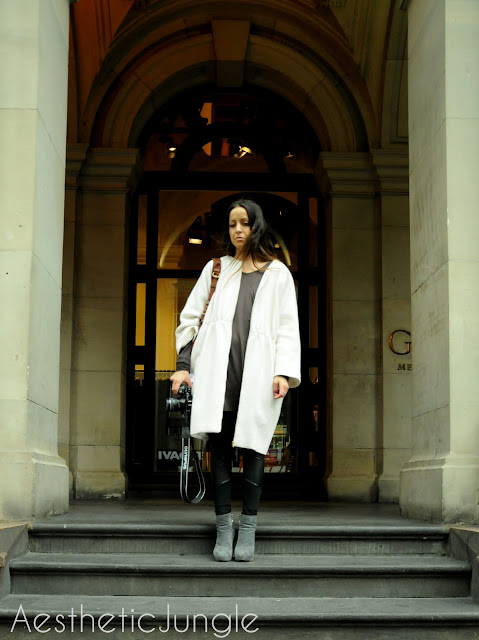 We were very stoked to have been photographed by a fellow fashion blogger, Sam,  in the CBD. This has never happened to us previously and as Michael said before, we felt a sense of deja vu. Check out her blog here 'fashiontrics', loving her recent posts that describe her inspiration.
B. 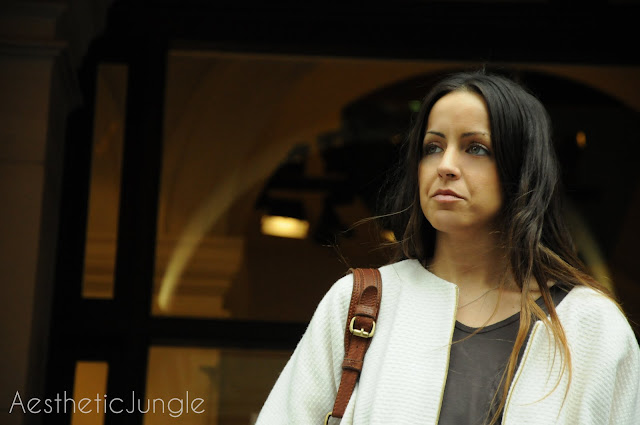 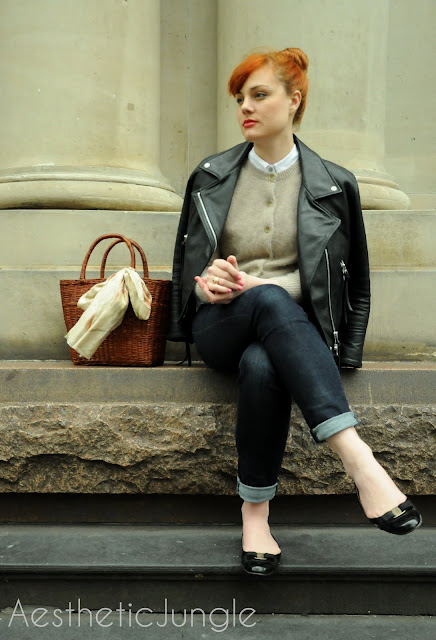 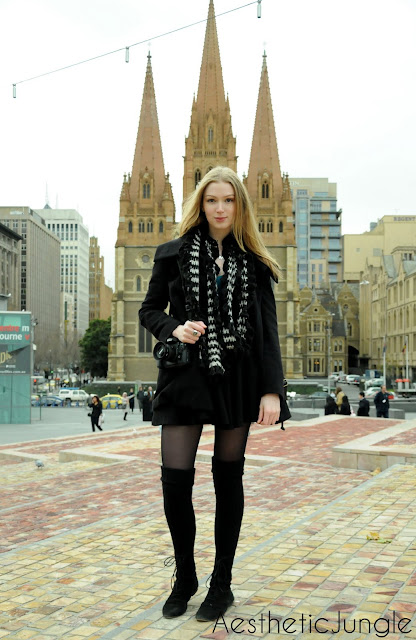 This girl caught our attention as soon as she walked by and was polite enough to let us take up some of her time. It was a rare moment where, although she wasn't a model, I swear she could have been! Every shot I took she gave me a new pose and in the end every shot looked fantastic. It was a struggle to choose one to post. It really shows how some people just have the innate ability to communicate their look and expression to the camera.
B. 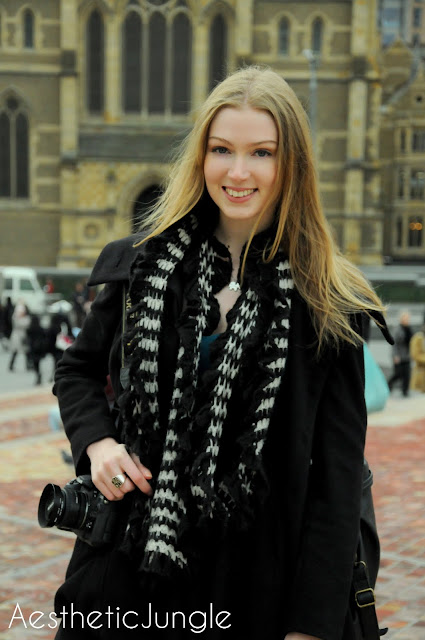 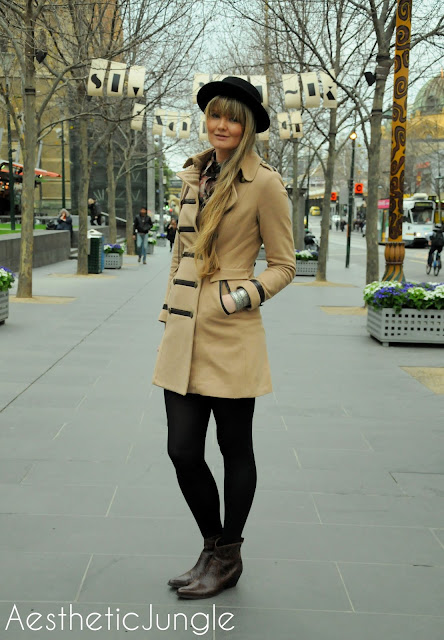 After shooting the previous girl I wasn't sure i'd come across someone with such flair in front of the camera, but I was soon surprised. We bumped into this fashion designer from Sydney on our way to the town hall, and every shot I got of her looked great as well! She had a great style and was up for a chat which we always love.
B. 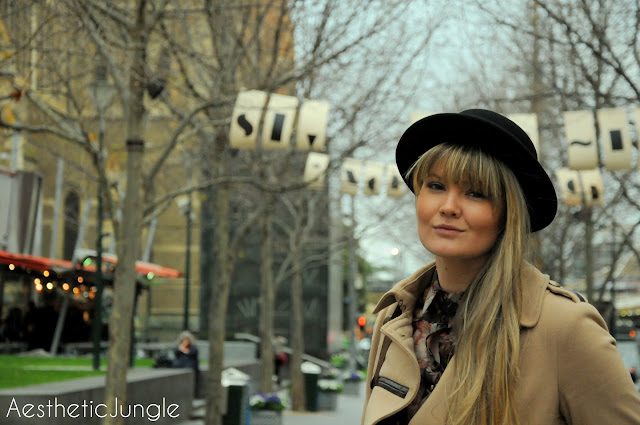 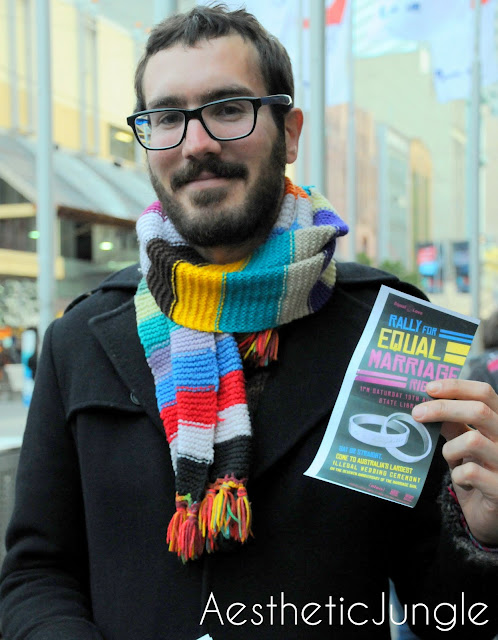 On our way to the tram stop on the Bourke St mall we bumped into some same sex marriage activists who were out to gain support. Check out the event on facebook and get behind the rally. Here's a description from the facebook event...

'On the seventh anniversary of the marriage act being re-written, we at Equal Love and the majority of Australians demand equal rights now!'

Not only did we dig this guys look, we also were into the cause he was representing.
B.

Posted by AestheticJungle at 5:14 AM